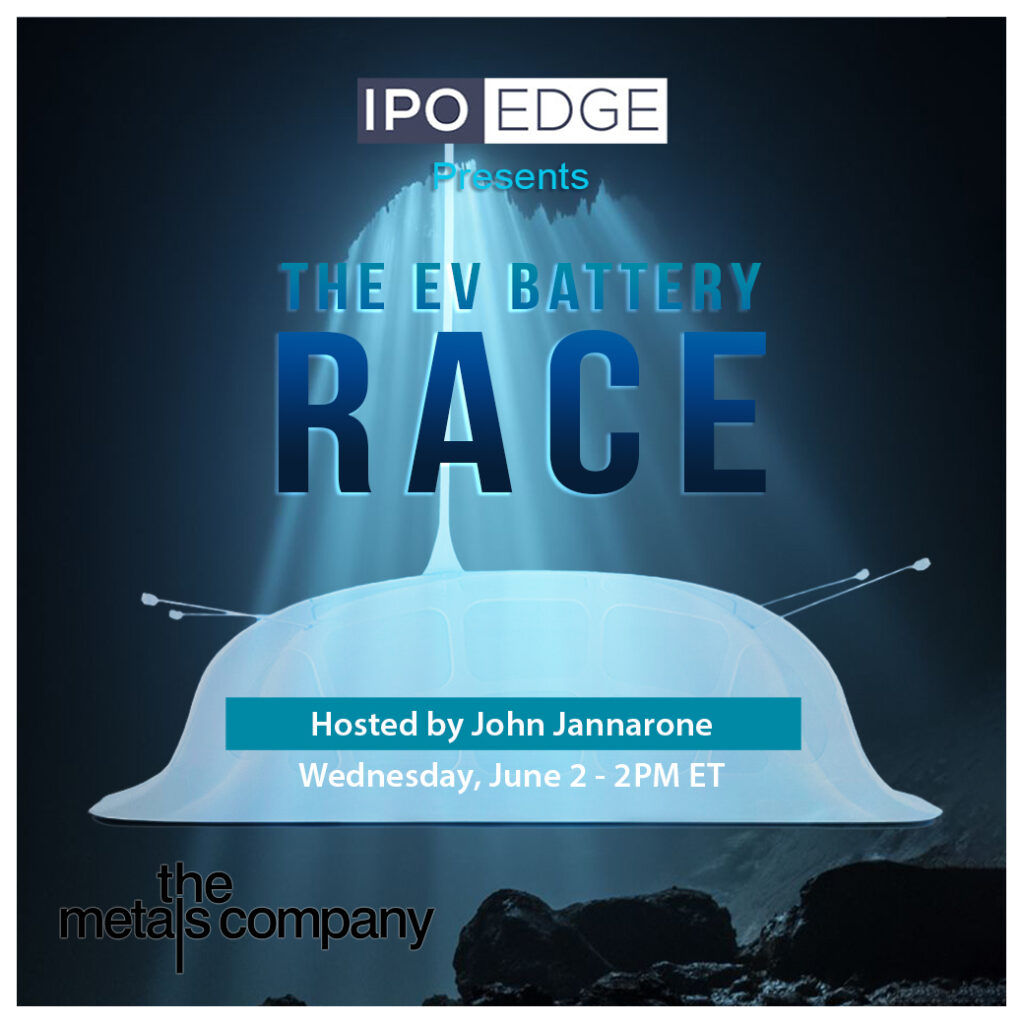 IPO Edge and The Palm Beach Hedge Fund Association will host a fireside chat with The Metals Company and Sustainable Opportunities Acquisition Corp. (NYSE: SOAC) on Wednesday, June 2 at 2pm ET to discuss their merger. The live event will feature The Metals Company CEO Gerard Barron and SOAC CEO Scott Leonard. IPO Edge Editor-in-Chief John Jannarone will moderate the video session, which will last approximately 45 minutes and include a Q&A with the audience.

The Metals Company (formerly DeepGreen) is a developer of the largest estimated reserve of lower-impact battery metals from seafloor polymetallic nodules, on a dual mission: (1) supply metals for the clean energy transition with the least possible negative environmental and social impact and (2) accelerate the transition to a circular metal economy. The company through its subsidiaries holds exploration and commercial rights to three polymetallic nodule contract areas in the Clarion Clipperton Zone of the Pacific Ocean sponsored by the governments of Nauru, Kiribati and the Kingdom of Tonga, which are regulated by the International Seabed Authority. DeepGreen has developed a process for producing metals from polymetallic nodules with near-zero solid waste, eliminating the need for tailings dams on land.

Messrs.  Barron and Leonard will discuss:

-An overview of the business combination with SOAC and valuation

Gerard Barron is on a mission to help wean humanity off fossil fuels and transition to a circular resource economy. He is a seasoned entrepreneur with a track record of building global companies in battery technology, media and future-oriented resource development, both as a chief executive and strategic investor. He became involved in the early strategic development and financing of DeepGreen during its formation in 2011 and stepped into the role of Chairman and CEO in 2017.

Gerard is leading The Metals Company’s three-part strategy to first inject a sufficient supply of four virgin metals (Ni, Mn, Co, Cu) into the system to enable the green transition, then track and recycle the four metals that The Metals Company injects, and ultimately work through the rest of the periodic table to circularize the remaining metals. If The Metals Company succeeds, mining virgin ores – whether on land or in the ocean – will become a marginal human activity as we meet most of our metal needs by recycling a shared common stock of metals.

Scott Leonard is the founder and CEO of Sustainable Opportunities Acquisition Corp (NYSE:SOAC)., the first ESG focussed SPAC.  Previously, Scott has served as a CEO, CFO, President, and board director of public and private equity companies.  Most recently he was CEO of GenOn Mid-Atlantic and CFO / CRO at GenOn Energy Inc.  Previously, he was SVP, Commercial Operations at Hewlett Packard Enterprise, Deputy Executive Director at TxDOT, and SVP, Finance at TXU.  Scott began his career as an Engagement Manager at McKinsey and as an investment banker at DLJ.   Scott earned a B.S. with Highest Honors from Georgia Tech, and an M.B.A. with Distinction from Kellogg School of Management at Northwestern University.