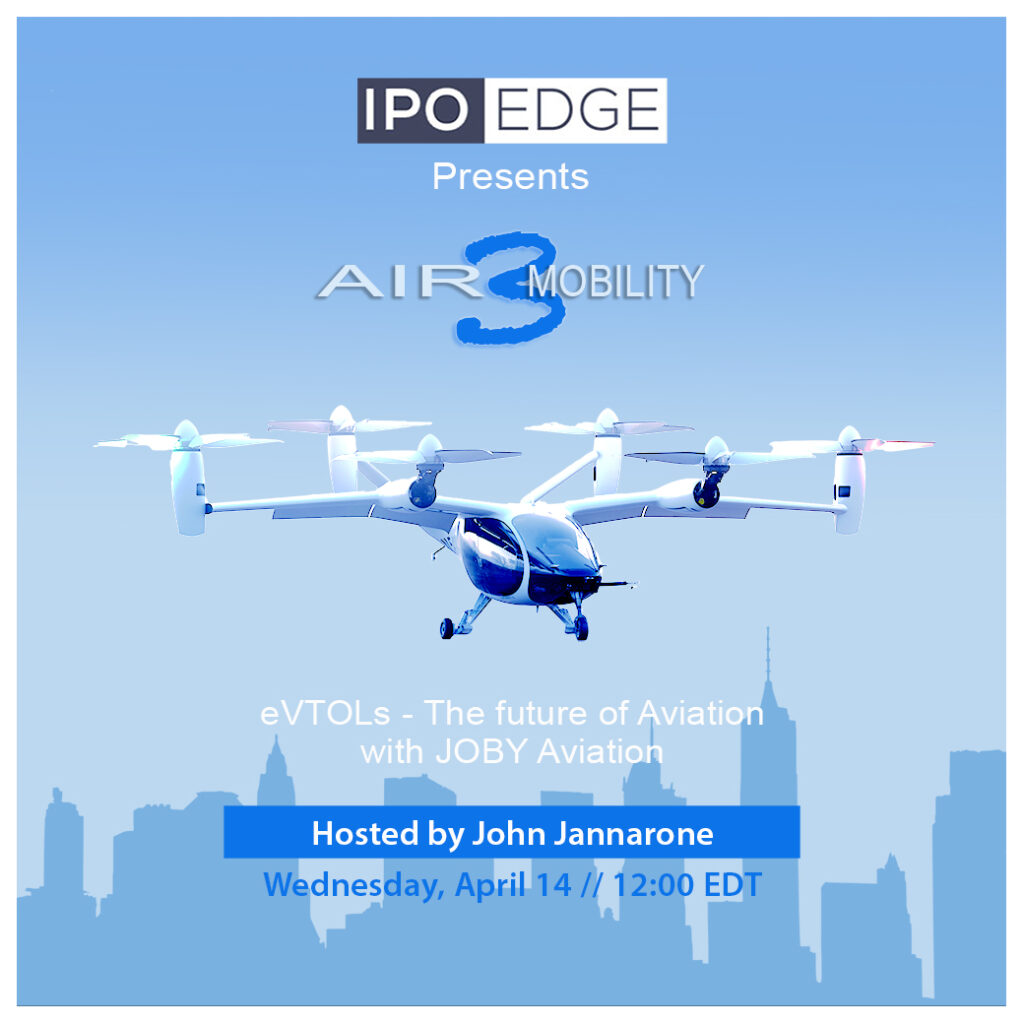 Mobility is being redefined. Joby Aviation, which is going public through a merger with Reinvent Technology Partners (NYSE: RTP), has aggressive plans to put 1,000 electric, vertical take-off and landing passenger aircraft (eVTOLs) in service by 2026. And the best part: you’ll be able to order one from your smartphone. Toyota Motor Corporation, Uber Technologies, Inc. and the U.S. Air Force are all on board.

We heard from Joby Aviation’s senior leadership Wednesday, April 14 at 12:00 EDT in a virtual event to discuss the company’s cutting-edge air mobility technology, the regulatory landscape, along with investment opportunities.

The event, hosted in partnership with  The Palm Beach Hedge Fund Association, included a group panel discussion, one-on-one interviews, along with a live Q&A session, totaling approximately one hour.

JoeBen is the founder and Chief Executive Officer of Joby Aviation and has led the team since its inception, more than a decade ago. He has dedicated his life to driving radical innovation in electric propulsion and robotics. In 1999, JoeBen co-founded Velocity11 to develop high-performance robotic laboratory systems, which was acquired by Agilent Technologies. In 2005, he founded Joby Inc., a company that develops useful and delightful consumer products including the popular Gorillapod flexible camera tripod.

Paul Sciarra is Joby Aviation’s Executive Chairman and was its first outside investor. Lending his deep product knowledge and business acumen to the company, he was instrumental in the move to a four-seat aircraft operating within a service-based model. Paul’s proven ability to lead world-changing companies by building products designed around the customer is best exhibited by his role as the co-founder and CEO of Pinterest. After Pinterest, Paul was an entrepreneur-in-residence at the leading venture capital firm Andreessen Horowitz.

Dan is an Advisor for Joby Aviation. Previously the Deputy and Acting Administrator of the Federal Aviation Administration, he was responsible for the safety and efficiency of the world’s single largest aerospace system, and had oversight of the FAA’s multibillion-dollar NextGen air traffic control modernization program. He served as Senior Advisor on Aviation to the U.S. Secretary of Transportation, and as the FAA’s Assistant Administrator for Policy, Planning and Environment. Prior to government service, Dan was a military and commercial pilot.